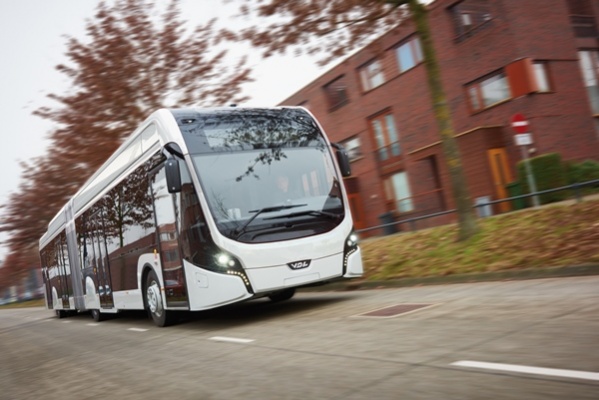 With 8 Citeas SLFA-181 Electric, ASSURED partner VDL Bus & Coach will be making a major contribution to the further electrification of Oslo Airport in Norway. The shuttle buses will go into service in 2020. Deployment of these VDL vehicles will help achieve the climate goals set by Avinor Oslo Airport, which is already one of Europe’s leading airports in terms of strict environmental requirements. The contract between all parties was signed on Thursday 1 August.

“The decision was taken to purchase the BRT model (Bus Rapid Transit), with which we won the prestigious international Red Dot Award in 2017,” explained Frank Reichel, Managing Director VDL Bus & Coach Norway AS. “However, Avinor is interested in more than just the design. Opting for our electric buses says a great deal about the ambitions of the airport. It ties in seamlessly with the overall picture of Norway as a frontrunner in the field of electric travel in Europe.”

VDL Bus & Coach uses a high capacity 216 kWh Li-Ion battery system on its Citeas SLFA-181 Electric. This offers the flexibility of higher energy capacity while retaining the advantages of rapid charging. The battery system is air-cooled and electrically heated so that the battery is always kept in optimum operating condition.

For the charging equipment, VDL Bus & Coach has once again joined forces with the Dutch company Heliox. For interim fast charging, a 300 kW rapid charger will be installed at the gate. By means of a pantograph on the roof of the bus, the battery can be fully recharged, in just a short time. To reduce the energy consumption by the bus, the interior temperature can be given an extra boost during the rapid charging session. 8 charging posts will be installed at the depot, each with a capacity of 30 kW. Here the buses are fully recharged at night, and if required, pre-heated.

For the full press release, have a look here.